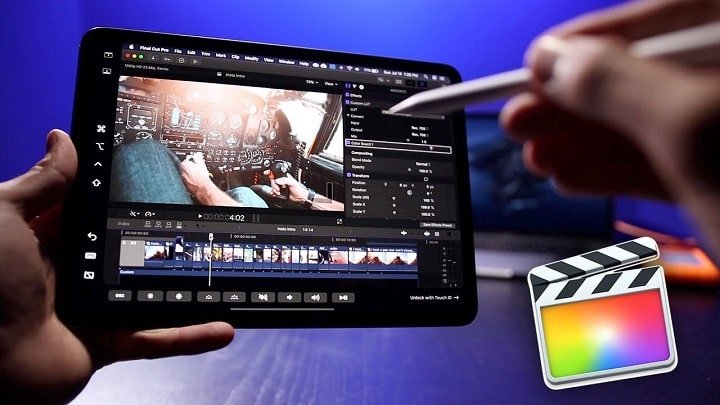 On their own, Macs are decent editing tools. They provide a stable platform that can meet the demands of a variety of editing programs. Why does this matter? Apple’s M1 chip is supposed to turn the iPad Pro into a full-fledged computer.

It can deliver the same functions you might expect to see in a powerful Mac, including 4K video editing features. Boasting a liquid retina XDR display, an ultra-wide front-facing camera, and a unified memory that is guaranteed to improve the efficiency of applications, the M1 iPad Pro is as effective an editing tool as you could ever want.

You can use the best video editing programs to render and export entire movies. If you want to run programs that require x86-64 architecture, Apple has an emulator that will enable consumers to run these applications.

Even with its limitations (Only One Thunderbolt Port), the M1 iPad Pro is superior to some of the computers that manufacturers have marketed as editing devices, especially when you consider the flexibility of the iPad.

The M1 iPad does not have Final Cut Pro, at least not yet. Therefore, if you need a video editor for iPad M1, you should look elsewhere. Fortunately, there is no shortage of options for you to consider. Some decent video editors that can work with the M1 chip include:

This is a great place to start for anyone that wants a video editor for iPad M1. It is easily the best option on the market for an iPad, an industry leader that amateurs and professionals will appreciate in equal measure because of the variety of functions it brings to the table.

The program stands out because it can contend with heavy projects. It doesn’t matter if you want to edit a 360-degree virtual reality film or an 8K video. The program won’t let you down. You can also use it to edit HDR.

You don’t have to wait for the development team to tweak the editor to fit the requirements of the M1 chip. The editor has already been updated to support Apple’s latest technology. It can refine video and audio projects to make them compatible with specific platforms.

That includes using the correct aspect ratio to suit the publishing avenue the consumer has in mind. Multiple users can utilize the editor’s collaborative components to work on the same project.

This application is not cheap. The upfront fee you are expected to pay is just the start. Depending on what you want, you may spend even more money on add-ons. However, the app is worth every penny because it gives you access to the same video editing interface you would normally encounter on a desktop.

It has a litany of attractive features, including 4K resolutions, a rich library of titles and transitions, and fast and slow-motion sequencing. You can control every aspect of your project, including the frame rates and aspect ratio.

The program isn’t as intimidating for newcomers as other advanced editors This is because it has a quick start interface that is designed to introduce beginners to the tool’s functions.

This application stands out because it is free. Compatible with Mac and boasting native support for the M1 chip, the program has every basic tool that an editor might require. That includes NextGen HDR grading instruments, 3D professional scopes, and advanced color management, to mention but a few.

You can do everything from getting live video previews to editing two thousand tracks in real-time, not to mention personalizing your workflow. You can use the editor to collaborate with multiple users.

iMovie isn’t the app to install if you want a powerful video editor for iPad M1. But it will do if you want a basic program that can edit a few video clips and images. People like iMovie because it is straightforward. The interface is as simple and uncomplicated as they get.

You will get all the basic editing tools. You can add background music, cut clips, insert effects and filters, etc. You won’t find this application on a professional’s iPad, not unless they are desperate.

But amateurs and hobbyists will appreciate it. At the end of the day, the editor is free, so you can’t expect it to compete with expensive video editing programs.

Power Director has a neat interface that beginners will enjoy. It has a bevy of advanced features but it welcomes amateurs all the same. You can use it to perform basic tasks such as combining video clips.

If you have the experience, this application can also edit entire movies. It has a hefty library with video templates, titles, and numerous transitions for you to choose from. You can also use it on projects that require 4K resolutions. Along with video editing, professionals will enjoy the wide-ranging audio-editing functions on offer.

You can get the application for free. Though, this will limit the number of features you can access. The editor’s subscription plans are friendly.

Kinemaster is also another level video editor which is specially designed for mobile users and if you have an iPad Pro M1 then it will provide you seamless performance. The editor brings powerful features which PC video editing tools offer. But you can access features like Chroma Key, Blending Mode, and Slow motion, and many more.

The editor comes with 2 effective plans first one is monthly and the second one is yearly. If you go for a year plan then you get a massive discount and sometimes it offers 70-80% off. We also tried its yearly plan which is working fine with no third-paty ads issue and fully control premium features.

You can download and install it on your iPhone and iPad for free from App Store. Check out the below link to install.

If most Apple fans had their way, they would use Final Cut Pro on the M1 iPad Pro. The M1 chip is supposed to elevate the efficiency and performance of the iPad. Final Cut Pro is already well-known for its powerful collection of features.

The editor would undoubtedly exceed expectations if you ever installed it on an M1 iPad Pro. But that isn’t an option at the moment. Final Cut Pro requires a Mac. Therefore, if you cannot use the editor on the M1 chip, you can make do with the alternatives listed above.